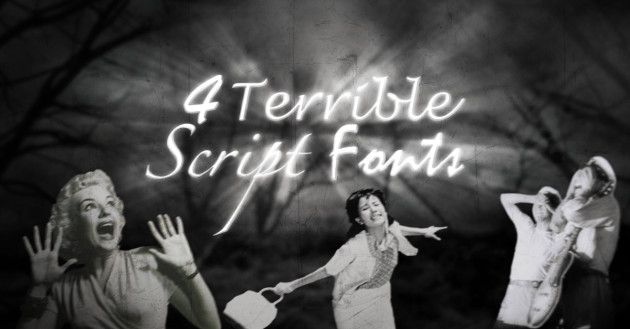 Not all fonts are created equal. In fact, some are downright terrible. That is what today’s Tipster Friday video is all about. From a font-beast to an old-timer font, Ara has some names (and strong opinions) about some of her least favorite script fonts.

Something that is especially important to keep in mind when using script fonts is that they should always be legible, not just fancy. Our tipster has font suggestions that are easier to read (and more stylish) for each of the terrible fonts she condemns.

Watch what she has to say about the fonts you’ve been using in today’s video.

Hey everyone, it’s Tipster Friday once again where I give you tips you’ve probably never heard of.

Let’s just cut straight to the moose, shall we?

Scripts are definitely not an everyday typeface. Even pretty scripts can be difficult to read. If you must use a script font, keep them to headlines and use them sparingly. That said there are some scripts you should avoid at all costs.

This script has been in every word processor since the beginning of digital history. When you first look at it, you might think, “Meh, maybe it’s not that bad. It’s got this cool, retro thing going for it.”

Now trust me, there’s cool retro, and then there’s so retro it belongs in an old-folks home. Retire Brush Script and change it out for a cleaner, modern font like Lobster.

Next, this monstrosity. Zapfino has been floating around for the last 15 years or so making menus at fancy restaurants illegible and typography generally impossible. For one thing, the ascenders and descenders stretch to oblivion. Try using it with a reasonable amount of leading. You can’t.

Banish this ugly font-beast and replace it with a beautiful font like Arizonia. It has class and grace that Zapfino only dreams about.

Next up is Mistral. You may recall this font from a certain film starring a certain heartthrob whom shall not be named. It’s because of this association that I really want to like Mistral. But when you actually start typing in this font, words become absolutely illegible. It’s meant to look casual, but it’s really just messy.

Take it from nameless heartthrob, you should ditch this font. Try Black Jack, this font is cool and casual. Isn’t that right?

Last but not least terrible, is Lucida Handwriting. Everything about this font is terrible…from the weird little strokes that dot the “i”s, to the kerning. You can’t fix it either. Decrease the kerning and the whole thing falls apart. The best advice I can give you is “just don’t.” Pretty much any font is better than this one. Sorry Lucida!

What fonts do you love to hate? Leave a comment!

Also, don’t forget to subscribe. I’ll see you next week!