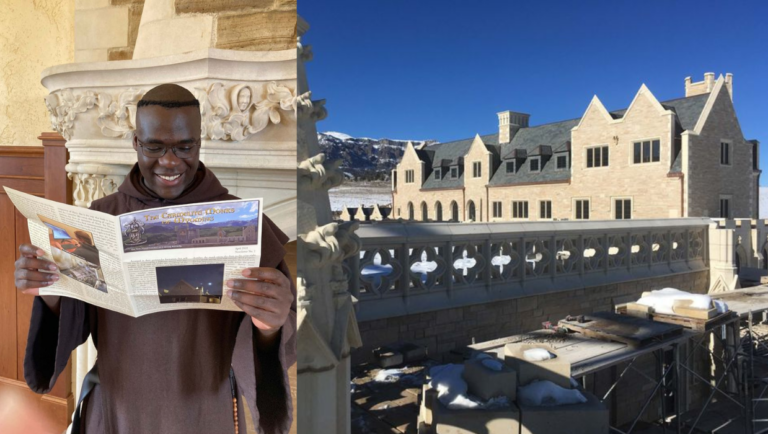 “The Carmelite Monks’ story sounds too incredible to be true.”

The community of Carmelite Monks of Wyoming is building a magnificent Gothic monastery that will stand for centuries upon completion – history in the making!

While building such a beautiful and well-built cathedral in Gothic architecture seems like a pipe dream, the Carmelite monks have something bigger than themselves: they also have great faith!

Discover an inspiring story of perseverance from our PrintPlace community. Read on.

How it all started

In 2003, Father Daniel Mary came to Wyoming with nothing but $400 and big dreams. He envisioned establishing a monastery in the Rocky Mountains in the Gothic architecture style, which can stand there for centuries to come. And this is something that has never been done in that corner of the world yet.

With this vision in mind, Father Daniel established a community of monks and headed the monastery.

“At first, it was a struggle just to keep the lights on. $400 isn’t much, even 20 years ago, and things didn’t come easy. A monastery of any sort, let alone a Gothic monastery, seemed like just a pipe dream.”

“Good things come to those who wait. Or maybe in this case, to those who roll up their sleeves and get to work!” says Brother Isidore.

“They could hardly take care of themselves, let alone build a monastery for the centuries of monks after them,” he added.

But they didn’t lose heart…

When young men from all corners of the US, and even as far as Australia, found out about the Carmelite Monks and their mission through their website, they came to give their lives to God in the wilderness of Wyoming.

Brother Isidore said, “Each new monk brought with him, not money, but his own energy and zeal to the little band of brothers.”

Practical and realists, the monks knew they must work hard to achieve their goals.

By 2007, they ended up roasting coffee in the quiet mountains of Wyoming – Mystic Monk Coffee was born. It is a specialty coffee roasting company that is operated by the monks themselves to raise the funds to support and build the monastery.

Aside from their efforts and perseverance, the monks soon obtained land property due to the generosity of several benefactors. The monks got landfall on a working ranch nestled up in the Wyoming Rockies. The place was perfect, tucked away in a secluded mountain valley. 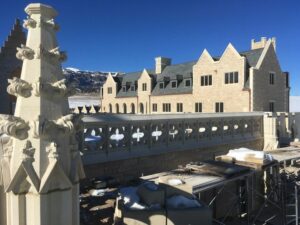 Baffled, but not defeated

Now that they had property, the only thing left was to build a monastery.

As the monks received the first pricing from construction companies, reality hit home. They realized they wouldn’t be able to raise that kind of money even in 100 years. Still, they did not lose faith.

Baffled, but not defeated, the monks went back to work. And since stone carving is an important part of building a Gothic monastery, they wondered how hard stone carving could be. Plus, Gothic stone carving is far from easy and none of the monks had ever carved stone before. Fortunately, there’s modern technology. 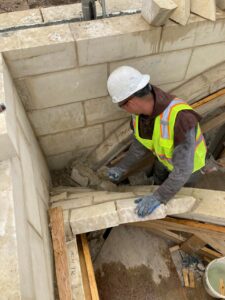 After thorough research, the monks came across stone CNC machines, which made stone carving faster and easier than a hammer and chisel. It is a massive computer-controlled stone carving machine that uses diamond bits to cut and shape stones.

The first CNC machine of the Carmelite Monks of Wyoming was sponsored by a good friend. With it, carving stones may be faster than the traditional methods, but that doesn’t mean it’s easy. Isidore shares:

“For months, the monks battled with the machine, trying to understand all the intricacies, until they finally had their minds wrapped around it and started carving stone.”

“With the mentality that anything was possible, one just had to figure out how they quickly pushed the boundaries of what these machines could do. Soon they were carving intricate foliage and flowers, pieces of art typically reserved for the hand carving of master craftsmen with decades of experience.” 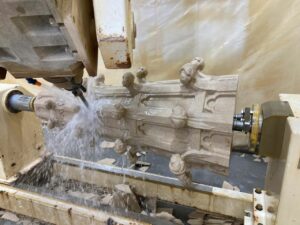 “This was only the beginning of the journey that continues today.”

Like the great cathedrals of Europe that took hundreds of years to complete, and from all the challenges that had been coming along the way, Brother Isidore realized that the monastery would take several years to complete.

And it’s not impossible. “The stone buildings standing in these Wyoming mountains are a testament that with determination, and maybe a bit of elbow grease, anything is possible.” 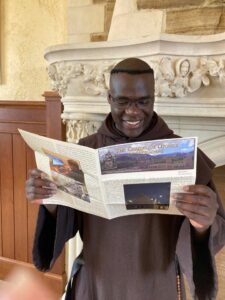 To share their story with the world, the Carmelite Monks sends out newsletters several times a year as they build the Gothic chapel one stone at a time.

“PrintPlace has done an excellent job printing (and folding) newsletters that are sent to their supporters throughout the world.”

Printed newsletters remain effective despite the modern era, and for a good reason. Aside from being simple and affordable to print, sending out these papers convey important information that is crucial to spreading the word.

Christine is a copy and digital writer who loves going to places and trying out new foods. During her spare time, she would play with and take photos/videos of her dog, eat, read, watch movies and travel blogs, or annoy her siblings. She appreciates spontaneity and new discoveries. If she disappears, you can find her at bookstores, coffee shops, or cinemas.